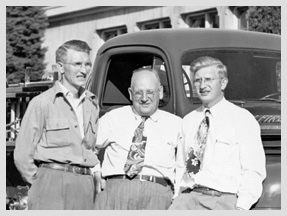 L.N. Curtis & sons has a long history with emergency responders. Lloyd N. "Pop" Curtis founded our company. Lloyd's brother, Newton, had partnered with his brothers-in-law in Glendale, California to build a mechanical resuscitator - a first of its kind.

They started this venture in 1928. The E & J Mechanical Resuscitator sold for $350.00, quite a pretty penny for those days. The brothers-in-law, Clarence Erickson (the "E" of E & J), a skilled machinist, and George Johnstone (the "J" of E & J), a noted doctor, had the talent in the development and brother Newton was skilled in sales, so this was a perfect union! In short order, Newton convinced Lloyd to begin selling the resuscitator with him and the "L.N. Curtis" company was born in 1929.

In true Curtis style, it was time to expand the business and Lloyd was picked to pack up and move to Oakland, California where he worked hard to sell the mechanical resuscitator and its offspring equipment throughout a great portion of the Western United States.

The Depression of the early 30's interrupted many American lives. It certainly hindered the sale of a resuscitator that was a very expensive piece of equipment for its day (as much as a new Chevy or Ford). Thus, Lloyd found himself trying to support a family and unable to make ends meet. He was, however, an extremely popular salesperson. Firefighters liked him very much, respected his tenacity and were intent on keeping him afloat. It became practice when Lloyd came around on a sales call to ask him "to pick up some fire boots and bring them on his next visit." "Lloyd, we could use some turnouts on your next visit. How about it?" This is how Curtis, as we know it today, was born.

Finally, the economy improved enough that, with the addition of a very small inheritance, Lloyd was able to buy a car and get back on the road. His sons, Jay and Bill were named "partners" and the "L.N. Curtis" company immediately evolved into, "L.N. Curtis & sons". 451 Hudson Street in Oakland, California was the garage that opened the doors to what has become one of the most successful distributors of emergency responder equipment in the United States. Lloyd, Jay and Bill Curtis each worked diligently in every capacity to be successful and support their family. In fact, none of them ever retired and each worked actively in the business until their deaths.

Salt Lake City, Utah was the first new division of the company and Jay Curtis was asked to run the business there. Jay’s son-in-law, Steven L. Chandler, ran this division until his retirement in 2009.

In 1945, the second division office opened in Seattle, Washington. A volunteer firefighter from Orinda, California and a friend to the Curtis family was handpicked to open things up in the Northwest. Don Miller, another son-in-law to Jay Curtis, eventually ran what is now the Northwest Division until his retirement in 1998.

Headquarters in Oakland, California was the responsibility of Bill Curtis from 1946 until 1988. Upon his death in 2005 he was serving as Chairman of the Board and was still acting as Secretary of the Corporation. His son, Paul Curtis, is President and CEO of the company. In 2019, the firm moved its Corporate Headquarters to a new administrative services facility in Walnut Creek, CA.